For a city struggling with overwhelming I&I, a holistic approach is the answer 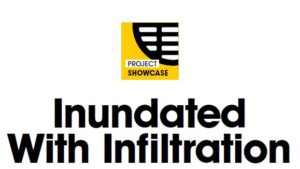 The citizens of Revere, Massachusetts, use an average of 3.5 to 4 million gallons of water daily. It’s surprising, then, that officials in the city of Revere Water and Sewer Department see double that amount going into its sanitary sewer lines.

While that department is responsible for wastewater collection and conveyance for the city’s 55,000 residents, it is the Massachusetts Water Resources Authority that treats its wastewater. That means Revere is paying the MWRA to clean millions of gallons of water that isn’t dirty. If that seems bad, wait, it gets worse.

“Now that’s during a dry day, right? Twice as much going out as what we are using,” says Nicholas Rystrom, city engineer. “During a wet-weather event, it’s seven times that. We’ve had cases of almost 30 million gallons of water going into the sanitary line, which is then going to the MWRA for processing.”

Aside from the apparent and significant inflow and infiltration problem, in August of 2010, Revere signed a consent decree with the U.S. Environmental Protection Agency. Per the decree, “The city experienced more than 722 sewer blockages or capacity limitations resulting in basement backups in its wastewater collection system and, on approximately 53 additional occasions, the blockages or capacity limitations resulted in surcharges that discharged raw sewage to surface waters in 2000.”

Rystrom blames poor reporting for those issues. The city was reporting its sanitary sewer overflows (approximately 220 per year) but without any detail as to the source. So, without data to show any distinction between dry and wet weather – or to differentiate between private and public sources of I&I – regulators were left to assume the worst-case scenario. They determined that all reported SSOs were dry-weather events, and they were all the fault of the public system.

Rystrom, who started working for the city in 2011, says what he understood from people who had worked there previously was that most of those SSOs were private blockages or collapsed pipes. A few were the city’s responsibility, but the majority were not.

“There was a lot of deferred maintenance that was happening, and a lot of rehab or replacement of the system that should have been happening but wasn’t,” Rystrom says.

Again, this was before Rystrom’s time, but he suspects that even if the money was there to do the work, it’s an age-old problem of a government not wanting to spend money on something their constituency cannot see.

The way Rystrom sees it, people don’t care about what’s underground until it stops working. “But as soon as they’re having backups, then it’s the end of the world and the cities are at fault.”

The city’s initial response to the decree was to ask how it could commit to a consent decree if officials don’t even know how big the problem is. The regulators either didn’t buy the argument or didn’t care, telling Revere it needed to fix its problem. That’s when the city of Revere began to get to know its sewer system by deploying CCTV, performing smoke tests and tackling the most apparent deficiencies that needed to be addressed immediately all over the city.

Four or five years later, when they had their heads wrapped around the citywide problems, city officials embarked on a private inflow removal process.

The city of Revere sits just north of Boston and lies along on the Massachusetts Bay. It is a coastal city with many hills and valleys, so Rystrom says it was safe to assume they had many issues with illegal sump pumps, roof leaders and roof drains. The city knew getting residents to volunteer to fix illegal sump pumps would be nearly impossible. Few residents would voluntarily let inspectors into their homes to uncover a problem that is going to cost a lot of money to fix.

To meet the consent decree, the city created a sump pump amnesty program. Notices went out with water bills asking customers to call to set up an inspection appointment. If no problems were found on the property, the homeowner would get a certificate that said they were in the clear. If an illegal sump pump was discovered, the city would assess the situation, take pictures, and then come out and fix it with no expense to the property owner.

“We’d put a plan together to fix 100 pumps at a time, and then we put it out for contractors to bid on.” Rystrom credits the amnesty program with the fact that they have fixed about 500 properties, with more in the queue.

Of course, there are those residents who will not cooperate for whatever reason, even if they don’t have a sump pump in their basement. Others simply do not respond. In these cases, the city lets the property owner know they will be in violation of the Clean Water Act, and they will eventually be forced to fix the problem and pay for it themselves. Rystrom says sometimes that does the trick.

There are roughly 12,000 buildings in Revere, and the goal is to inspect them all. To date, they are about two-thirds of the way through inspections, and about 12%-15% of the buildings they’ve inspected have had an issue that needs correction. About 15%-18% require additional follow-up testing. They have also expanded the program to include roof leaders and roof drains. Still, sometimes, even with the cooperation of the homeowner, the repairs must be deferred.

“I can’t redirect a sump pump and solve one problem by causing a new one,” Rystrom says.

That new problem he’s talking about is ice. Some pumps in low-lying areas might run all day long, and there is no drain system into which to tie them. You can’t just redirect flow out to the street, because you end up with icy roads and sidewalks in the winter. They must wait until they have about 10 on one street, and then they can make a good case for installing a new drain system for them all.

In addition to private remediation, the city of Revere also tackled comprehensive public sewer rehabilitation. CIPP lining of Revere’s mainline was determined to be the most cost-effective option while also providing structural and operation and maintenance benefits. Revere would see some reduction in I&I, but the extraneous flow would migrate. Engineering and construction firm CDM Smith recommended a comprehensive approach that included not only CIPP lining, by Insituform, of the entire mainline sewer, but service lateral connection lining and manhole rehabilitation as well.

The lining of the mainline sewer was straightforward. CCTV inspections using CUES products were performed to determine if the pipe was in good enough shape to get the CIPP treatment. If the pipe was broken or had a severely offset joint, crews would perform spot repairs before lining. Rystrom says that in some cases, they found dead ends on the mainlines with no structure for clean-outs. In those instances, manholes were added. CDM Smith also recommended including pipe seals or hydrophilic end seals as part of the CIPP lining process to eliminate extraneous flow into the adjacent manholes.

Finally, every manhole within a given area will be lined using a monolithic cementitious or epoxy liner. The flexible Strong-Seal system by The Strong Co. can move and shift during freeze-thaw cycles, extending the service life of the manholes with mildly deteriorated corbels and those showing signs of infiltration. Where corbels are completely deteriorated, recycled HDPE-grade adjustment rings made by LADTECH are being used instead of brick and mortar. Not only is it a more sustainable option, as they are manufactured from recycled materials, but they’re also unaffected by the freeze-thaw cycle and are easy to install.

Rystrom says the cost so far has been about $100 million, and most of the funding has come from the State Revolving Fund. Revere has not raised customer rates to pay for the work, but Rystrom says those rates are already high due to the city passing along the costs to clean water the equivalent of about 1,500 backyard pools when it rains.

The city is now into its 10th year of rehabilitation work, and Rystrom says the job is about 60% complete with 325,000 linear feet of 99 miles of sewer rehabilitated. Once the rehabilitation is finished, the city – named after revolutionary hero Paul Revere – will have the closest thing possible to a brand-new sewer system. While it will go back to being out of sight and most likely unnoticed and underappreciated by the city’s residents, Rystrom and everyone in the sewer department will know every pipe, connection, manhole and basement in the city like the back of their hand.

Using a monolithic cementitious or epoxy liner in manholes is a reasonably standard rehabilitation practice. However, Revere dug a little deeper to find cost-effective solutions that would extend the service life of the structures and reduce the amount of maintenance that would need to be done moving forward. For manholes displaying only mild deterioration, they used a flexible corbel lining system called Strong-Seal (The Strong Co.).

These fiber-reinforced cementitious mortars form a mechanical and chemical bond to the substrate. The flexibility allows the liner to adjust to movement due to traffic loading, shifting and expanding soils; temperature variation; and cyclic groundwater loading. The mix will even regulate the microbial activity, which further extends the service life of the manhole through added corrosion protection.

For corbels that were completely deteriorated, Revere opted to use the LADTECH system. These HDPE-grade adjustment rings are made using curbside recyclables and have a 100-year life expectancy. It’s a product that’s easy to install, requires less equipment and is impervious to hydrogen sulfide gas and road salt, which is a common problem in the Northeast.